If someone asked me what my immediate response to the word ‘Pongal‘ was, I would say ‘Temple‘. That is because, even as a kid, I would look forward to pongal which was offered as prasad, every time I visited a temple. In fact, that was the incentive for me to visit temples. If they did not serve delicious, savory pongal, disappointment would keep me from returning. So what is a prasad? This word actually exists in the Oxford Dictionary! According to them, prasad is  “a devotional offering made to a god, typically consisting of food that is later shared among devotees.”  This derives from the original Sanskrit prasāda, meaning  ‘clearness, kindness, grace’.

Aside from temple, pongal for me, has several other associations. For instance, there is sweet pongal, made from the same base ingredients and makes for a delicious dessert. Pongal is also a harvest festival celebrated in in South India and also referred to by several other names. Check out our sweet pongal (Huggi) recipe and the festival story here.

Now, to the actual pongal we’re talking about in this story here: savory pongal is a South Indian breakfast dish that is made from

lentils and rice, similar to the North Indian dish called Khichdi (you can check out our khichdi recipe here), though the other ingredients may vary. Khichdi can pack a lot of vegetables but pongal does not include any. While khichdi is a recipe with which you can experiment a lot, pongal is strictly vanilla. The moment you try to change it, you lose the core flavor and that’s not fun at all. So the only thing I decided to try and substitute was the rice. Instead of the highly polished white sona masuri rice, I used the 24 Mantra Organic Hand Pound Brown Rice. The challenge with brown rice is that it takes much longer than white rice so you will need to soak it for at least a couple of hours to soften its texture to almost that of white rice. It’s well worth the trouble as brown rice is healthier and doesn’t sacrifice the taste of pongal much. You may notice that it is not as mushy as white rice pongal, but that’s an easy fix – just add more water and cook it longer.

If you’re a pongal enthusiast like me, check this out and let me know how it tastes. With the added health benefits of brown rice, I’m sure you’ll not be disappointed! Malathy has an excellent pulichaad recipe she got from her cousin Janaki Rao (who has blogged with us). Pongal and Pulichaad are the yin-yang of South Indian cuisine. Hopefully, I can persuade her to post the pulichaad recipe soon. Stay tuned!

Why is this Healthy?

Consisting mostly of brown rice and yellow mung beans, this recipe is rich in fiber and protein, making for a great breakfast, snack or your main entree at a meal. 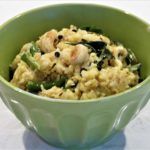 Pongal is typically served with sambar and coconut chutney but it also goes great with tomato chutney, or a tamarind-onion based stew called pulichaad. *Use organic ingredients wherever possible