How My Desire to Serve, Started My Wellness Journey 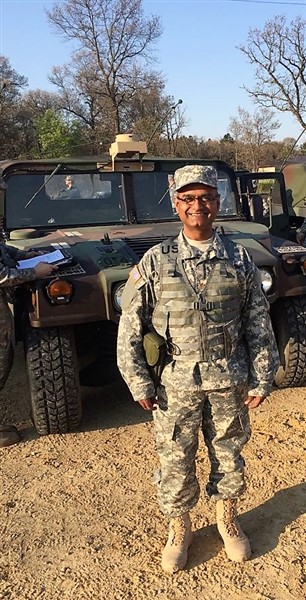 For Dr. Hitesh Pandya, the reason for his path to wellness was his calling: his passion to join the United States Army.

I caught up with Dr. Pandya one evening to find out what makes him tick. We talked about a little bit of everything, which I’d like to share with you.

On his Background and Work at the VA:

I graduated from medical school in India in 1991 and came to the United States to join my family in 1994. Initially, I wanted to become a cardiologist, but after having worked in the ICU as a resident, I quickly got bored of it. After volunteering for the Manhattan Psychiatric Center and working at the Social Psychiatry Research Institute, I got hooked into Psychiatry.

Most of my patients are PTSD veterans that are dealing with alcoholism (more recently with heroin). With veterans, addiction to heroin is due to chronic pain issues. A few begin using heroin for recreational reasons, but a majority get addicted through opioid prescription pain medications. Heroin addiction is difficult to treat because of initial withdrawals. People take a little bit of heroin to feel ‘normal’. Slowly, less is not enough and this proceeds to become an addiction to get high.

On Alternate Therapies at VA:

Alternate therapies like meditation/yoga have become very popular in VA. Last year, the VA and Army published new guidelines for PTSD: it states that therapy is more important than medication. There is a walk-in program for yoga at the VA, where classes are designed for chronic pain. The combined package of non-medication techniques like breathing, meditation and therapy approach works much better than medication alone.

Breathe to Relax, a free and self-motivated app is recommended by the US Army and is available on their website as a beginner technique. It is a simple way to start with 6-7 slow and deep breathing techniques.

Relapse rates are very high with people battling with addiction and that’s a big struggle. Meds alone are not the answer. Once the initial withdrawal symptoms are controlled using meds, Support Programs will go a long way to sustain treatment.

On Why he Joined the US Army:

Working for the US Army was never in my dreams. In 2012, I read an article in the USA Today that soldiers were returning from wars and the suicide rate was at an all-time high. This made national headlines at that time. Right at that time, I received a letter in the mail from the US Army seeking trained psychiatrists to work with returning soldiers.

I was 44, and not sure if I qualified as an officer since the age deadline is 35.  But rules are relaxed for specialized doctors, since the US Army needs qualified doctors. So, I contacted the recruiter and I was told that so long as I am in good physical shape, I could apply. I applied in 2012 and after a rigorous physical turn-around, I took my oath as a commissioned offer in December 2014.

On his Prep to get Physically Fit:

When I applied for the US Army, I wasn’t physically fit.

On his Physical Fitness Challenges: 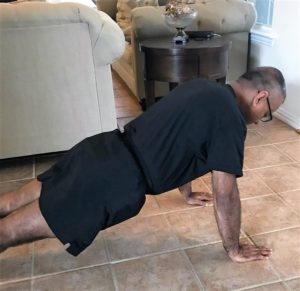 To run 2 miles in 19 minutes, I had to lose fat and build muscle and stamina. I set a goal to lose 15 lbs. weight. I joined a gym and hired a personal trainer for 8 months to help me achieve my goals.

I went from 5 push-ups to 40 push-ups in 2 minutes. I built up biceps and triceps. Sit-ups were harder, but with persistent training I could get to 40 sit-ups in 2 minutes. Running got complicated – I injured my Achilles tendon, but I managed to past the test. Instead of running, I now opt to doing 6.2 miles resistance biking to qualify.

Because the Army brings discipline, it kept me motivated me to get fit. Slowly, as regular exercise became a habit, I stopped going to the gym. You really don’t have to pay to keep fit.

On his Radical Change in Diet:

I had watched a documentary called ‘Fat, Sick and Nearly Dead’ about an Australian who went on an all-smoothie diet, and decided to follow suit. I went on a 10-day all-juice diet.

I drank 5-6 smoothies all day long during my weight loss initiative. Initially, it tasted horrible!!! But sticking with the program was key, as I started to develop a taste for smoothies. You develop a taste if you consistently stick to your regimen. Even today, I bring a smoothie to work every single day.

As I started achieving my Army pre-requisite goals, gained stamina and got my weight to the desired goal, I slowly eased my diet back to having normal dinners, while continuing to have smoothies for breakfast and lunch.

On his Current Exercise and Diet Regimen:

I do 20 push-ups and 20 sit-ups daily as soon as I wake up. After getting home from work, I ride my stationary bike while watching comedy TV with my wife. Since I need to qualify once a year and pass the Army Physical Fitness Test, once or twice a week, I do the army training requirements: 2-minute push-ups, 2-minute sit-ups and riding the stationary bike for 6.5 miles with resistance.

On how this Influenced his Family: 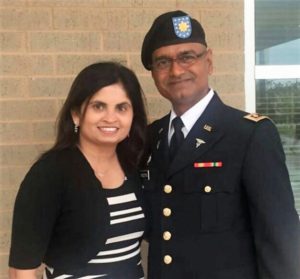 Parents are the greatest role models for their kids.

My son who was 14 at the time, was unwilling to come to the gym with me. He’s a movie buff and I tempted him with a big screen TV in the gym where he could watch his favorite movies while working out. The first time, he watched a movie for 30 minutes and loved it. Gradually, I introduced him to my trainer, and he got hooked on working out.

My daughter, who was 19 learned by observation. She said, “if daddy can do it, so can I”. She started using the treadmill at home, lost a lot of weight, started cleaning up her diet. After living in the dorm for almost 2 years and keeping late hours, she has maintained her health and weight. These are lasting influence being imprinted in their minds at an early age.

My wife Chitra also started drinking smoothies. We started playing tennis together as a family activity. Ever since the kids were young, we have made it a practice to eat together at the dinner table, and although we have relaxed this ‘must-do-daily’ rule in high school and college, we eat 2-3 dinners together.

The second is work by John Ratey – he researched the Effect of Exercise on depression and anxiety. 20-30 mins of exercise is equivalent to taking Prozac, or small dose of stimulant.

30% of the general population people have some kind mental illness at some point in their lives. Most common example is – Generalized Anxiety Disorder. This is more common in women – symptoms include tiring and getting irritable easily, worrying a lot, and not sleeping well. After trying yoga, meditation etc., it is okay to take medication for a short time. This can be a game changer. These medications may improve quality of life, when paired with diet and exercise.

Associating with real people (vs. virtual friends on social media), socializing, and staying in touch with friends and family is important. Faith is plays a big role – associating with fellow members of your religious place of prayer helps. A person that is well connected with society carries a lower risk for suicide.

The biggest challenge around mental health, by far is – stigma, stigma, stigma. People don’t get help because they are afraid to be labeled as ‘crazy’. This makes it hard for people to get help.

On Alcohol, Alcoholism and Depression:

Ideally, if you are not drinking, don’t start! There is a difference between normal drinking vs problem drinking. Social drinking for women is 1 drink a day i.e. 12 oz. of beer, or 4-6 oz. of wine, or 1 oz. hard liquor. For men, it is 2 drinks per day. Does that mean that a person can have 7 drinks in one day? Drinking all your quota on a Saturday night puts you into poor judgement. 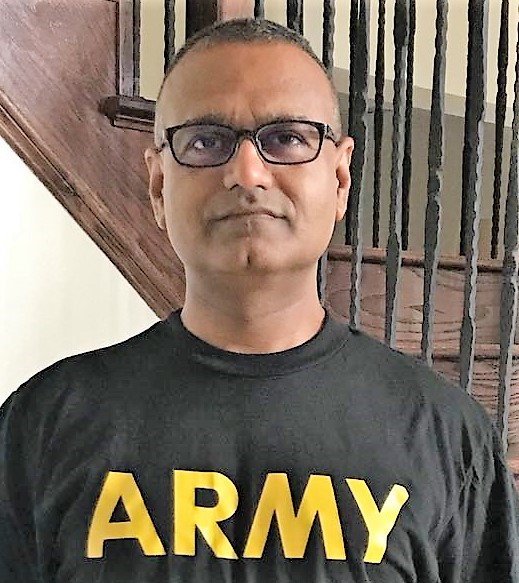 Dr. Hitesh Pandya completed his Psychiatry Residency in Wichita, KS in 2002 and worked for a private hospital in Wisconsin for 15 years. He works for the VA hospital in Fort Worth, TX as a Psychiatrist and Addiction doctor. He is a part-time reservist for the US Army. He lives with his wife, son and daughter in Plano, TX.