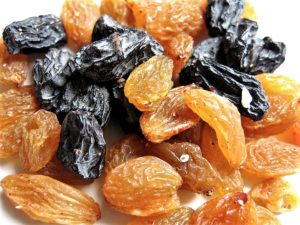 Raisins today are produced mostly from Thompson seedless grapes, which were introduced to California in 1862 by William Thompson. To produce raisins, grapes are laid on brown craft paper trays between the vineyard rows and allowed to dry in the sun when harvested. This is the natural sun-drying process that turns grapes into raisins.

When it comes to raisins nutrition, they have a considerable concentration of phenolic compounds, which play a role in cancer prevention and treatment. Raisins contain the following phenolic compounds: quinic, gallic, chlorogenic and caffeic acids; catechin; and epicatechin. While many people like to avoid sulfur dioxide (especially those who have an allergy), golden raisins have more of some health-promoting compounds because the antioxidant effect of the sulfite used to produce golden raisins inhibits the loss of these compounds.